US Fish and Wildlife Services
Alabama: Threatened and Endangered Species

Health and Environmental Agencies in Alabama

ADEM: Alabama Department of Environmental Management
ADEM administers all major federal environmental laws, including the Clean Air, Clean Water and Safe Drinking Water acts and federal solid and hazardous waste laws. ADEM assumed these responsibilities only after demonstration that state laws and regulations are at least equivalent to federal standards and that the state has matching funds and personnel available to administer the programs.
ADEM: Alabama Environmental Regulations and Laws

Alabama Department of Conservation and Resources:  Outdoor Alabama
The Department of Conservation and Natural Resources is an executive and administrative department of the State of Alabama created by statute. The Commissioner, appointed by the Governor as a member of the Cabinet, advises the Governor and Legislature on management of freshwater fish, wildlife, marine resources, state lands, state parks, and other natural resources.
The Department has four divisions: Marine Resources, State Lands, State Parks and Wildlife and Freshwater Fisheries. 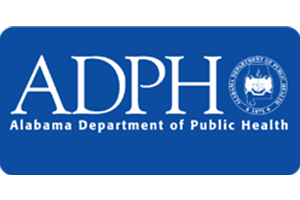 Alabama Department of Public Health Alabama law designates the State Board of Health as an advisory board to the state in all medical matters, matters of sanitation, and public health.